How can you possibly consider starting your own business when you are married with three children, have a mortgage to pay, no savings to draw upon and would be abandoning a solid job?

That is exactly what Glynne Dyer did a year ago when he finally took the plunge after 18 years in recruitment to set up his own agency Vanta Staffing based in Slough.

But Glynne’s new chapter of entrepreneurship is not about him borrowing more than he can afford, putting his house at risk, and living off credit cards month-to-month to keep the wolf from the door.

He launched Vanta Staffing in June 2017 completely risk-free thanks to support from The Recruit Venture Group, which backs new recruitment businesses with 100% of the finance needed for launch, as well as a swathe of back office support to get things up and running.

Glynne said: “I’ll be perfectly honest, with a wife and three kids to take care of as well as a mortgage to pay, there is no way I would have been able to start this new adventure without the help of The Recruit Venture Group.

“Like a lot of people, I was at a stage of my career where I knew that if was ever going to run my own business, I had to do it then. I’m so glad I decided to go through with it.”

The Recruit Venture Group model takes care of not just finance, but all the other essential business functions like payroll, accountancy, marketing, IT, legal and HR. The model is specifically designed to allow talented recruiters to get on with the job they do best – filling vacancies with quality candidates and keeping clients happy.

Glynne’s career story is one of continued success, from starting at the bottom of the recruitment ladder to working his way up to area manager positions, with responsibility for setting up and running whole branches.

But he knew something had to change when, despite taking on more and more responsibility from his employer, he noticed that his pay packet was actually reducing, because he was no longer able to focus on work that would earn him commission.

“It was then I knew something had to change, and I knew deep down that if I had my own business, I would not only have full control of my working day, but also more control over what I earned too,” said Glynne.

It was January 2017 when he had his first meeting with Paul Mizen, Managing Director of the Recruit Venture Group after being put in touch via a colleague.

“Paul was great, and we just had a really useful early chat about the possibilities of me going it alone, and how he could help.

“My wife Charlotte was very against the idea, because of our position with the children and the mortgage, so she came with me to the next meeting. By the time we had finished our conversation with Paul, she was even more excited about the idea than I was!”

Vanta Staffing then launched in June 2017, just six months after Glynne’s initial chat with Paul. Focusing on the industrial, driving and commercial sectors, Glynne says those first six months flew by, getting the business established, making calls and building trust among clients, both old and new.

Vanta now employs six people and turned over twice as much money in 2017 as Glynne was expecting and he now has plans to treble that turnover again for 2018.

Paul Mizen, Managing Director of The Recruit Venture Group, said: “We support 43 businesses just like Glynne’s and I’m delighted to see Vanta Staffing going from strength to strength in just its first 12 months.

“It is so satisfying for the whole Recruit Venture team to see the potential of these talented recruiters unlocked through owning their own business.

“Once we sit down with people and have a chat about how we can support them, like we did with Glynne, you see that fear factor go. That initial trepidation turns into optimism and energy for what their new business might achieve. The 43 businesses that we support daily are testament to the fact that this model really works, and I was delighted when Glynne said he too was ready to take that next step. The results speak for themselves.”

Glynne added: “Nothing quite prepares you for when you walk into your own office on the first day of trading and pick up the phone for the first time. It’s exhilarating and it’s also a little bit scary, but ultimately this journey so far has been so rewarding and I wish I had taken this step sooner.” 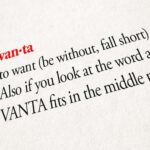 What's in a Name?

What’s in a Name?